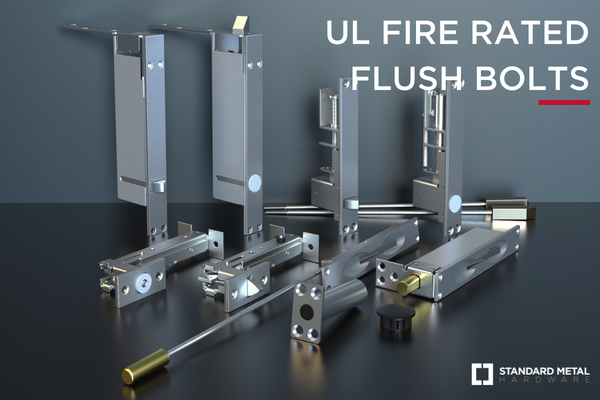 Manual flush bolts require an individual to manually flip a lever to retract the bolt. The bolt is retracted until the door is re-latched by pushing the lever again to extend the bolt. They are most often installed at the top corner of doors. Available for wood and metal doors.

Self-latching flush bolts, also called “constant-latching”, latch automatically when the inactive door is closed. The bolt stays latched until the bolt is manually released by pressing a button on the bolt face. Self-latching flush bolts are available with a universal Fire Bolt which eliminates the need for floor prep. Available for wood and metal doors with a universal (wood or metal) option.

Automatic flush bolts latch automatically when the active door is closed. When the active door is opened, the bolt is released to allow both doors to open. Automatic flush bolts are available with a universal Fire Bolt which eliminates the need for floor prep. Available for wood and metal doors with a universal (wood or metal) option. Also available in sets.

Combination flush bolts are sold in pairs and include an automatic bolt on the bottom of the door and a self-latching flush bolt at the top of the door. The top self-latching bolt latches automatically when inactive door is closed and stays latched until button is pressed on the bolt face. The bottom automatic flush bolt automatically retracts when the active door is opened. Available for wood and metal doors with a universal (wood or metal) option.

Fire Bolts are installed on the inactive door with a receiver installed on the active door. When the door is subjected to 230°F the bolt plug and receiver cover will melt allowing the bolt to project, locking the leaves together. UL Listed only when used with automatic or self-latching top bolt. 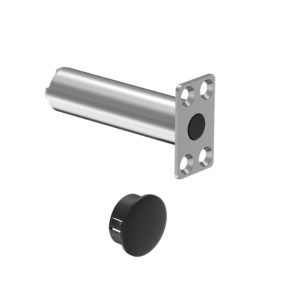 About our UL Fire Rating

Standard Metal’s line of flush bolts are Underwriters Laboratory (“UL”) Listed. The UL certification mark is relied on by code enforcement officials and buyers as an assurance that products meet regulatory requirements for use on fire rated openings.